See Our Calendar
Contact Canyon Elk Lodge
Thank you! Your submission has been received!
Oops! Something went wrong while submitting the form.

From Wikipedia, the free encyclopedia 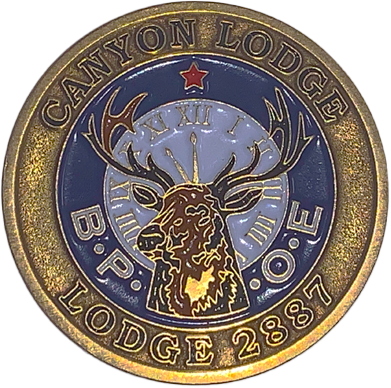 A challenge coin is a small coin or medallion, bearing an organization's insignia or emblem and carried by the organization's members. Traditionally, they might be given to prove membership when challenged and to enhance morale. They are also collected by service members and law enforcement personnel. Historically, challenge coins were presented by unit commanders in recognition of special achievement by a member of the unit. They could also be exchanged in recognition of visits to an organization.[1]

Challenging
The tradition of a challenge is the most common way to ensure that members are carrying their unit's coin. The rules of a challenge are not always formalized for a unit, and may vary between organizations. The challenge only applies to those members that have been given a coin formally by their unit. This may lead to some controversy when challenges are initiated between members of different organizations and is not recommended. The tradition of the coin challenge is meant to be a source of morale in a unit, and forcing the challenge can cause a reverse effect. The act of challenging is called a "coin check" and is usually loudly announced.[15][19][28]

‍While most holders of challenge coins usually carry them in their pockets or in some other readily accessible place on their persons, most versions of the rules permit a challenged person "a step and a reach" or if an individual has an extra coin to pass it off to the person closest to them. Coins on belt buckles or key chains are not acceptable for meeting a challenge. However, a coin worn around the neck is acceptable for meeting a coin challenge.[18][19][28]

Traditionally, rules of a challenge include a prohibition against defacing the coin, especially if it makes it easier to carry at all times. If the challenge coin is attached to a belt buckle or key ring, or has had a hole drilled in it to attach to a lanyard, it no longer qualifies as a challenge coin.[19][29]